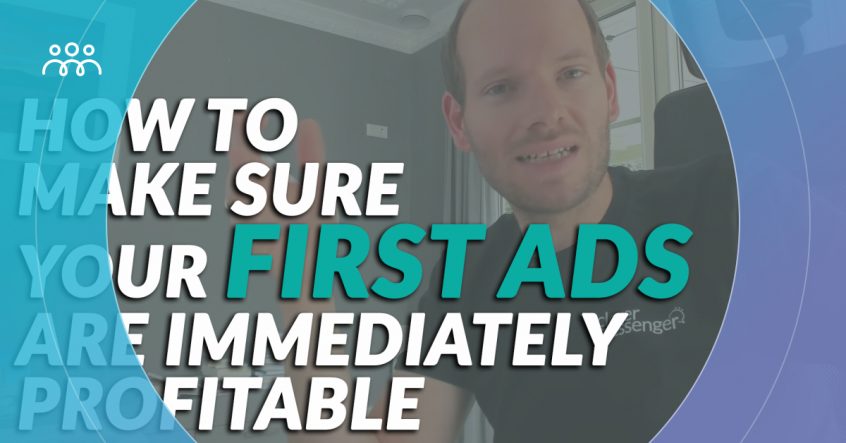 Are you excited to run your first Facebook ad?

Like most business owners and marketers, you’re probably thinking of targeting as many people as possible… Because the bigger the audience you target (yep, including strangers) the more sales you’re gonna get.

In all honesty, this is the last thing you should do. It’s expensive and less likely to get results.

If you want your ad to gain profit from the start, check out this video.

I reveal the “Inside Out Method”. A strategy that will make all the difference.

Watch it and let me know your thoughts in the comments section below!

Hey, it’s Wilco de Kreij here from Connectio.io and in this video, I’m going to share with you how to make sure that your very first Facebook ad is actually going to be profitable. And yes, I know, a lot of people are struggling with that, because there’s a lot of competition on Facebook. But if you do it the right way, you can definitely make sure that your first ad is actually profitable, as unlikely as that actually seems.

Because as I mentioned, there’s a lot of competition out there. But once you’re at the point where you actually spend $1, on Facebook ads, and you get two or even $3 back out, I can tell you, like I can say like, it’s a lot of fun.

But the reality is like, the moment I first experienced that, it really changed it for me, because that’s when I realized that, you know, once you have something like that it’s actually very scalable, it’s not so much, you know, just spending $1. But then you start to spend 10, and you start trying to 50 and 100. Right now, I spent over a million dollars on Facebook ads for my own money for our own products for – to promote connectIO and to promote Upviral.com. And we’ve been doing consistently at a profitable rate. And part of that is because of what I’m about to share with you in this video.

Because at Connectio, we actually help Facebook advertisers to grow and make their ads more efficient, spend less time in them while making sure they’re more profitable. And by doing that, obviously, I’m an interaction with a lot of different Facebook advertisers, including some that are at the start of their journey who haven’t really started advertising yet, but they want to, and they see the opportunity, but they’re not really sure how or they’ve just tried, and it’s just not profitable, right?

And I’m not surprised to be honest, because a lot of people they are “I want to advertise on Facebook. So I want to get my message out to the world to a cold audience who’ve never seen my ads before. Who have you know, I’m just going out there. And I’m going for the most difficult thing you can do on Facebook. And I’m still going to start with that.” It’s definitely not what I recommend, I’m not surprised, because that’s what a lot of people are saying you should do. Like, hey, yeah, you should, you know, advertise and just target whoever.

But the reality is that the best thing you can do is first start with people who are an audience that are as likely as possible to actually purchase your product, right? Because if you cannot make your ads work with those people, then how’s it going to work for people who are not interested in your product yet, right?

So I call this the inside out method, right? So if I’m going to sketch this out, let’s say this is an audience, this is everyone on Facebook, right. And right here, I’m going to call different layers right here in the center, we’ve got a hot audience, that is like HOT audience – those are people that are like, they’ve seen your product, they have been to your website, but they haven’t purchased yet. Right? They’re like interested.

But usually, as you may actually know, people need to see something for at least seven times, on average “the rule of 7” before they actually consider to actually purchase. So it’s not like they just came through website, and the right in the first get go, like, I’ll purchase that, or Yes, I’ll schedule a call or whatever your goal is, right? So but there are a lot of people that have maybe a visit your website, but they just, you know, they, they’re they’re not yet they haven’t pulled the trigger.

And then around that there’s a lot, which is like I would say right here is a warm audience. And those are people that you know, they may be heard about you and they were already aware of the issue that you’re solving with your business, because every business or every product or service, you solve a certain problem or solve a certain need. They’re already aware of that. And then outside of that these are the glue, they’re cold, right, like cold audience right here on the outside. So that that’s what you would target. If you would say like, Hey, I’m going to target based on the interest, I don’t know, if you’re selling golf stuff, I’ll just I’ll just target golf. As an interest, as a keyword, right? That’s those people. And those people are the hardest to convert, because they’re not, they don’t know who you are, they may not even be aware of the problem they’re having, right? So you need to really educate them, like how you’re actually having this problem. And we have a solution. And not just that, but we are the best solution. And you need to open up your wallet. In other words, a lot of steps it would actually take, which is not impossible, but I’m just saying that if you start it out, it is not the best way to actually do it. Right.

So if you’re starting out with Facebook ads, what I would recommend is actually go for the hot audience. And actually, there’s an even better way you can do it inside another audience which would be basically retargeting audience, people who have visited your website, but they left without buying. But what you can even do, you can even drill deeper. And then inside your retargeting audience, there is an audience. Let’s call that the super hot. Those are the people that have been on your website. And they’ve actually, you know, they actually showed engagement because some people that use go to upset and they bounce back right back, they’ll just go to your site, and within a second they’ll know it’s not for me, right? And others, they’re going to like be on your website, they’re going to scroll around, they’re going to scroll down all the way to the page to the bottom of your page. They’re like they’re on your on your site for a couple minutes. Right? Things like that, like you. If they do that then you know, they’re actually truly engaged, actually truly interesting.

And you can target those people using a tool called ConnectRetarget, which is one of the tools that we have, it’s called, it’s called ConnectRetarget. What it does, it allows you to do behavioral retargeting. So you can say, for example, hey, I only want to show ads to people who’ve been to my website, but who only those who actually scroll down to a certain percentage, right? So I know they’re engaged. Or only those who spend more than 40 seconds on my site, or there’s a bunch of other things you can do as well, it’s really, really cool. And with that, you can target your most passionate, super hot audience of people like and what

I would do, if you’re starting out with Facebook, start with those people who are almost like they’re so engaged, they just haven’t bought, they haven’t just purchased yet. And try to make your ads work with that. I mean, if with those ads, if you’re targeting those people, you almost cannot go wrong with it. And here’s the cool part that you need to do. The important part that you need to do, once you’re doing that. Let’s say you’re starting out with that, I’m guessing that your first ad is going to be profitable, but there is a but. I don’t want you to stop there, right?

Let’s say you’re you create a Facebook ad towards those people, like it’s really hard not to make it profitable, it’s probably going to be profitable for you. But let’s say you would, you would spend the dollar, and you would get a $3 back. Now there’s two things you can do. You can either jump in the air and be happy, cool. Or you can get to work and actually improve, you can instead of just accepting that your ad is profitable, then what you do using this audience, which is like low barrier, low risk, right?

You start testing things out, like what if I tried different ad, could I actually, instead of 123, can I get the ROI to like five or six, because if you if you are if you’re doing that, if you’re trying to get it to convert better, what you’re actually doing is you’re learning. You are learning the Facebook ad system, you are learning what your audience actually responds to, you are basically creating the muscle that you need, in order to then once once you’re comfortable, move away, like that’s what I call the inside-out-method, then you start moving away from the inside, you move through your hot audience, and then you start moving over to your warm audience. And only like, if at a certain stage it’s actually profitable.

So if you’re at the like, if you cannot get your warm audience to be profitable, then don’t actually move over to the cold audience, right, because you’re not there yet. It’s not ready, you’re not ready yet.

First of all, make the warm audience also profitable. And then you can move over there, right. And that’s really the stage where some people, they’re trying to work from the outside in, which is not going to work because you’re starting out with the hardest possible thing. And hopefully, it can work. But you will need to spend a lot of money for just the testing it out. While what I would what I would expect, what I would suggest you to do, start with the lowest hanging fruit first or inside from inside out your super hot audiences. Play around with the Facebook interface, get familiar with it, get confidence in it, that’s just as important because if you’re you know, if you’re spending $100 or $500 on Facebook ads, and you’re just losing it all, guess what you’re going to do? You’re going to stop advertising, right?

That’s how it works, because then you’re like, I’ll just try something else because this doesn’t work for my business. And you’d be it’d be logical to think that right?

So there you have it. If you want to be profitable right from the start, make sure to work inside out. Start with your hottest audience, get ConnectRetarget. Retarget those who have already know who’ve been on your website who have actually spent time your website who scroll down like who’s shown that they’re interested in your product they just haven’t purchased just yet. And once you have those profitable then you start retargeting everyone. Once you have those profitable you go out to your warm audience and then you expand from there.

And with that having said, I’ll see you in the next video.