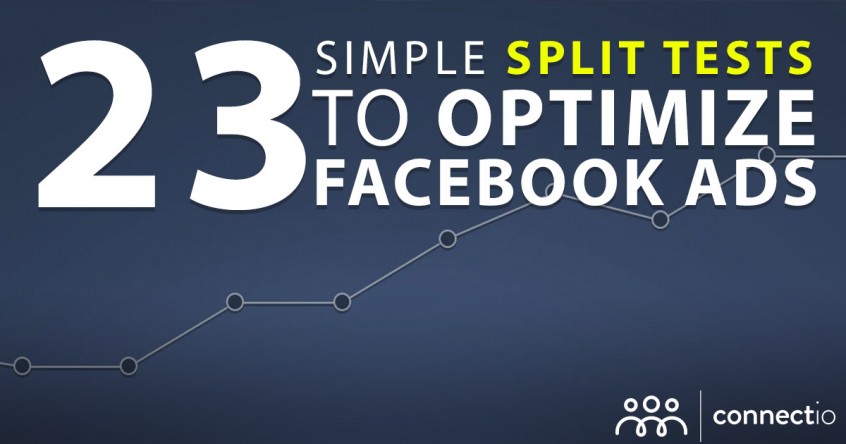 Getting a good ROI on your Facebook Ads is easy, right?

Well… no (at least not right away).

Even though you know how to dial in to your target audience, chances are that your first attempt doesn’t “hit the jackpot”.

There are simply too many variables that could “make or break” your campaign.

Are you using the best headline you could use? The perfect image that people respond to? Are you phrasing the benefits of your product in the best way possible?

You get the point.

This is where A/B or Split Testing comes in.

By setting up a series of different Facebook Ads towards the same audience, you can measure which ad is converting best for your business.

“What kind of things should we test?”, you ask?

Look no further! Below you’ll find 23 things that you can split-test in your Facebook Ads in order to increase conversions.

6 things to test in your Headlines

Headline is one of the most important part of the ad. It enables in pulling user’s attention, defining your message and directing them towards the Ad body.

You can test a headline by asking questions or not. The headline can be a straight pitch to your product or service or it can be question that triggers user’s action.

See how Fun App uses questions and curiosity in their ads to drive engagement. 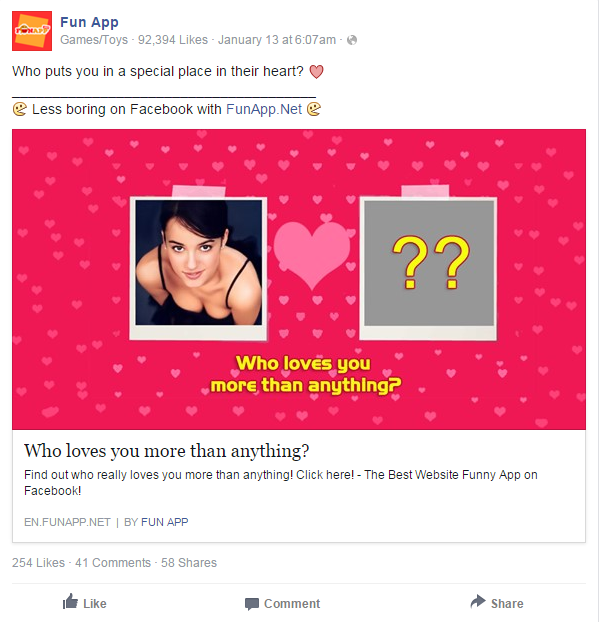 2- Focus on your Product / Service Benefits

In your headline try to state and test the different benefits your product / service has to offer.

See how Kabbage rotated the same ad copy of benefits in between the ads body copy and headline. 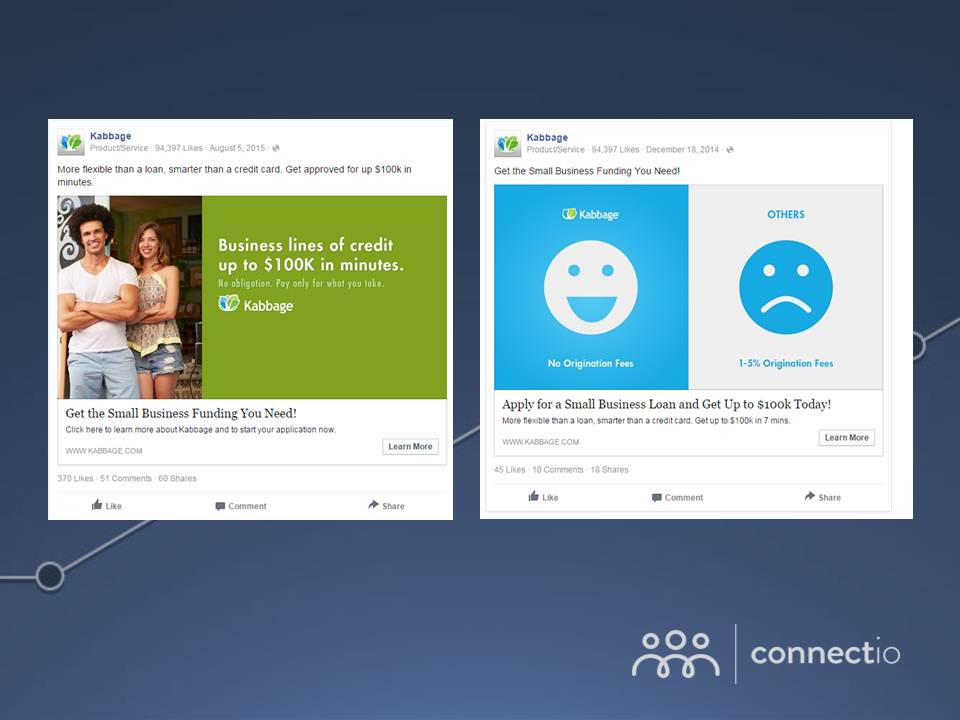 3- Use Power Words to drive action

Typically, an ad with power words tend to perform much better than those without it. Power words are common with customers and they quickly grab eyeballs and attention. However, you can also try split testing an ad without using power words

By just adding the word “Free” impacted the ad engagement for Displate. 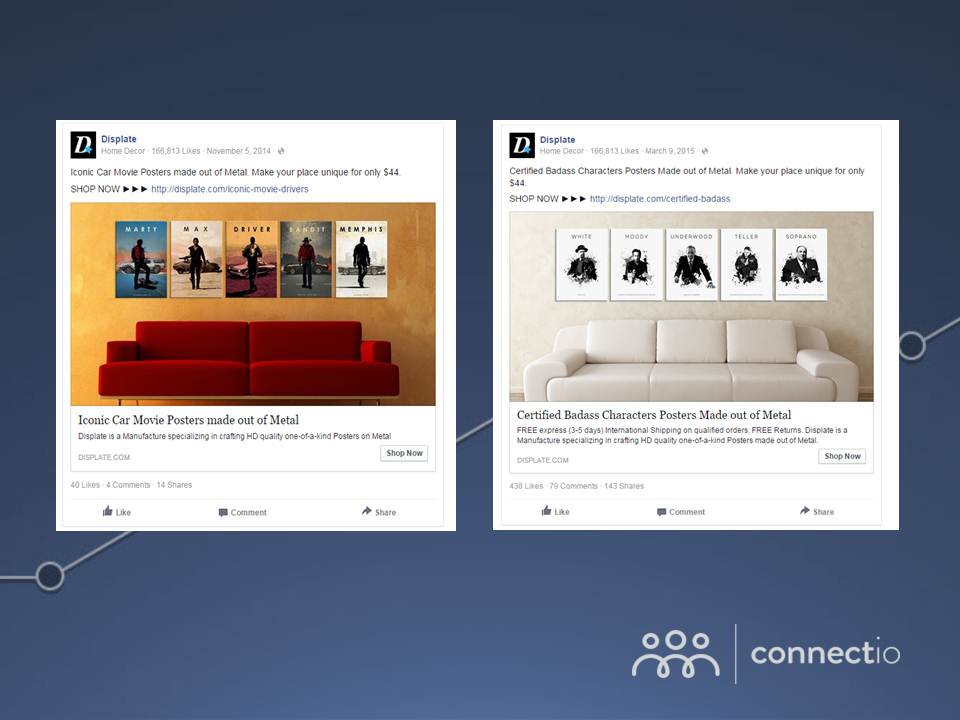 4- Use scarcity for your benefit

People tend to perceive a product / service more valuable if it is scarce, rare or hard to get. Try testing your ad headline with scarcity and non scarcity based headlines.

In this example, see how Groupon dominated the ad response on the same type of product. But Groupon’s offer was double scarce. It was limited time offer (but open) and the Pet Carrier Backpack is also a rare /scarce variety of Backpacks. 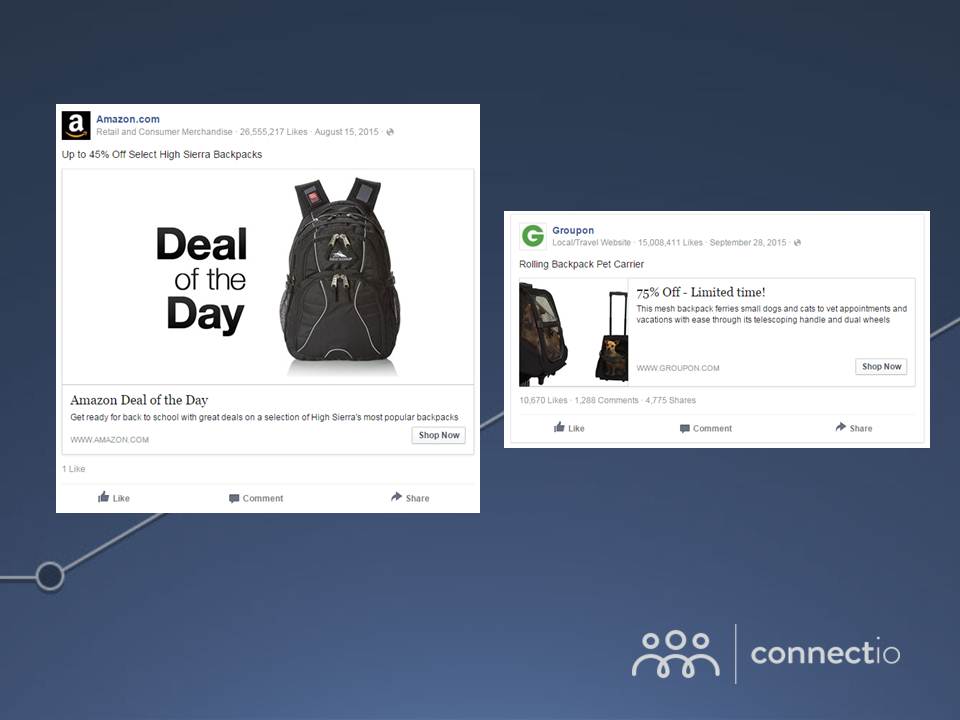 5- Combination of Short and Long Titles

Marketing Pundits mostly recommend to use a short to the point headline. But sometimes long headline can outperform short headlines.

SumoMe experimented almost the same copy with different title headlines. The ad with large and descriptive headline was clearly the winner. 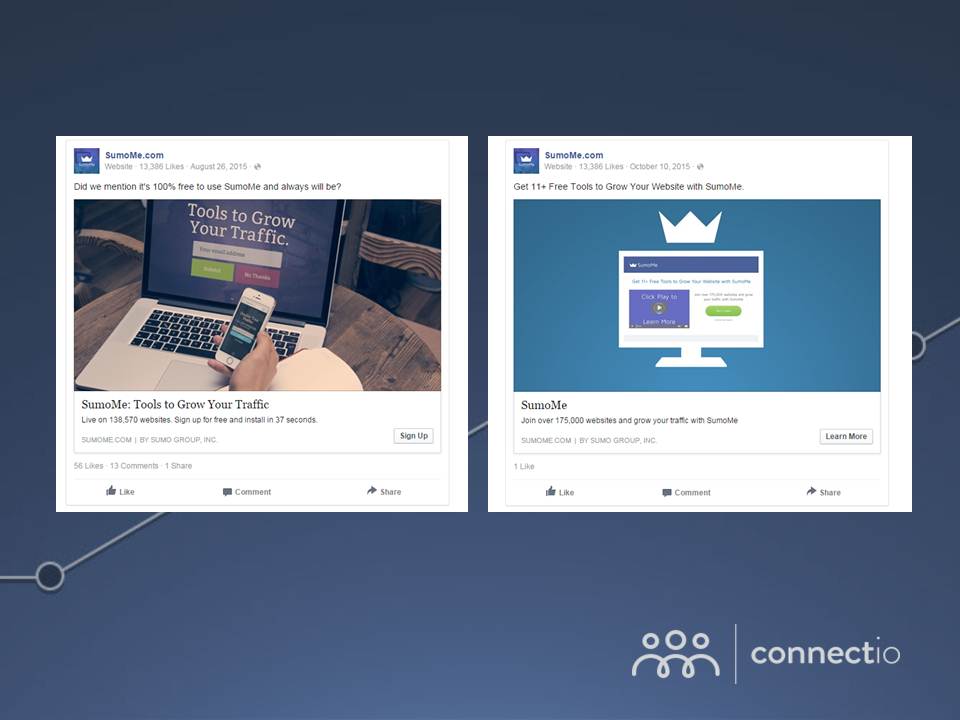 Clipd got more traction with the ads that were more negatively superlative. 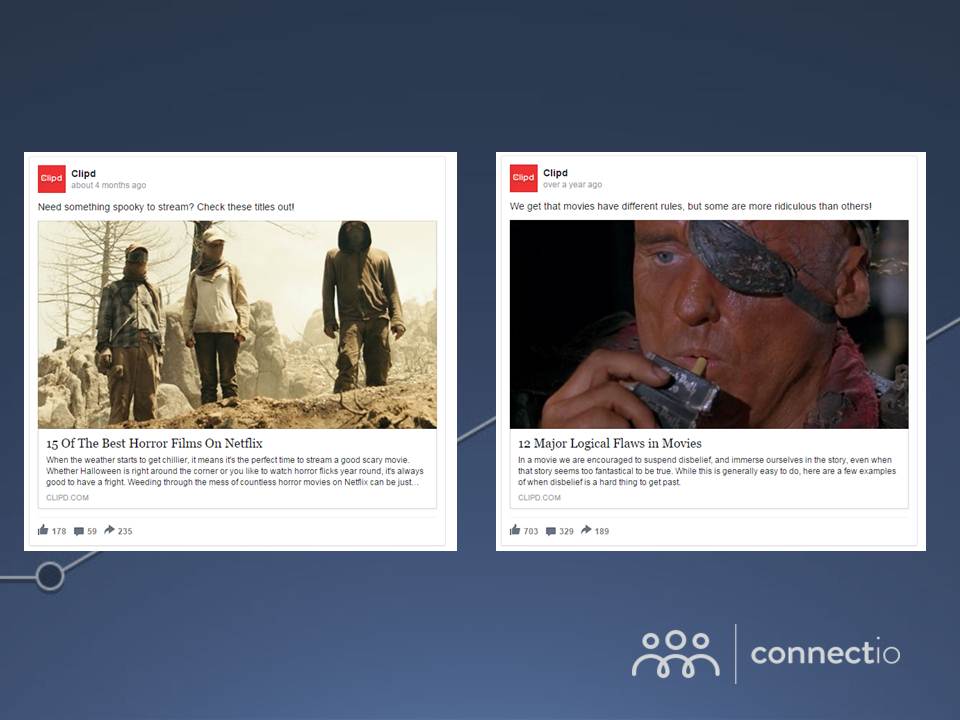 4 Things to Test in your Body Copy

Though headline is the first part a user sees, it makes sense to test your ads body copy for different variation too.

Body Copy further defines your title and usually triggers the decision to click through the ad or not. A powerful headline with weak body doesn’t qualify as a good ad.

So you must also split test different components of the body part too.

Similar to small headline vs a large headline, a good way to test body copy is using short vs long body copies. 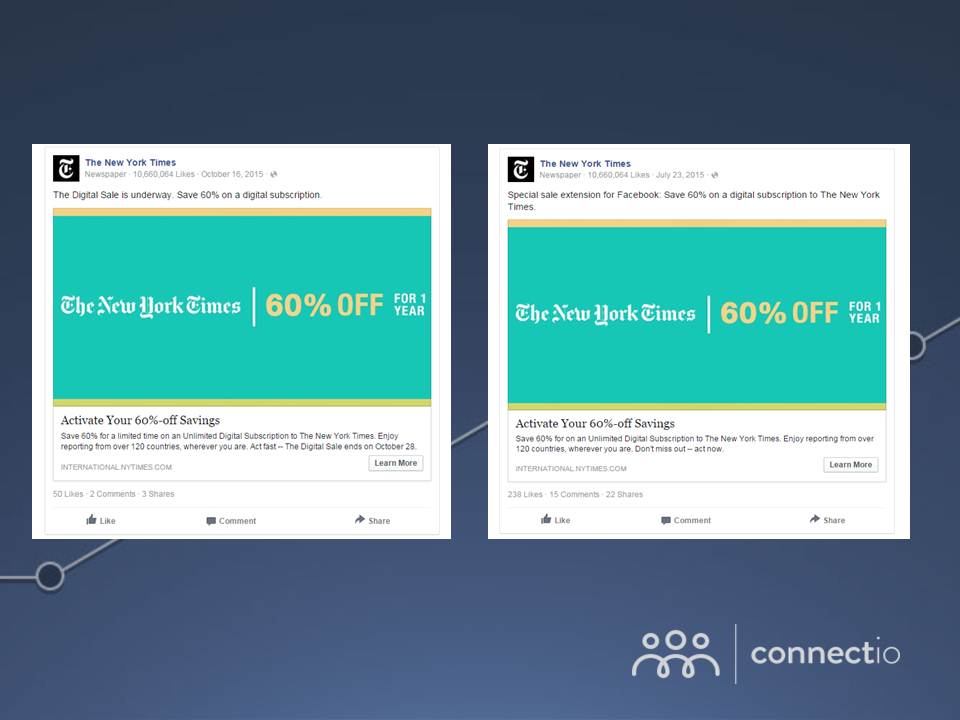 2- Testing with or without a Testimonial

Typically, advertisers rarely ad a testimonials inside an ad. You can split test your ad by using dual copies one with a testimonial and one without it.

Just by adding a small testimonial, the ad for CreativeLive spur better engagement. 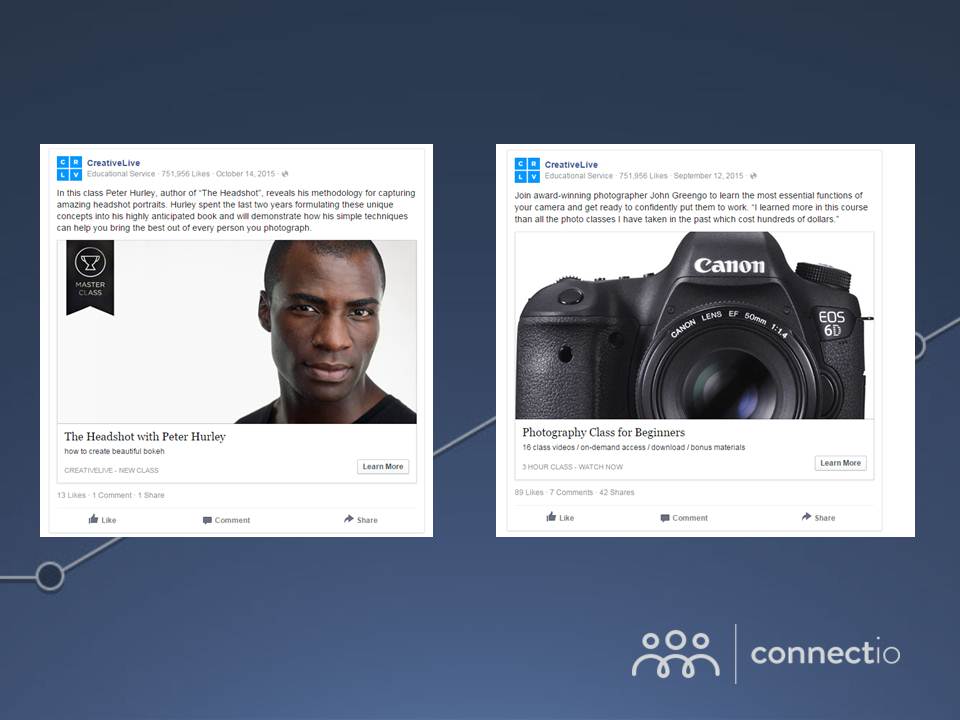 With Facebook Ads, you can assign different CTA buttons with your ad. If the copy / content of your ad allows, test out different variations using a separate CTA buttons.

Tilt tested their ads using different CTA buttons. These CTA were based on the type of ad they created. 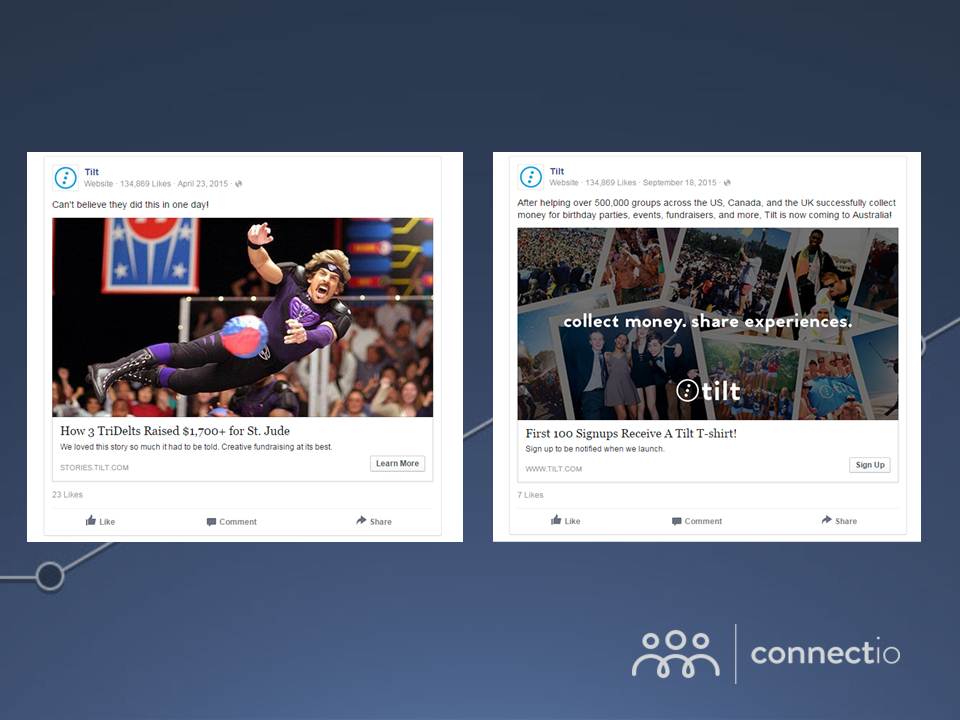 Naturebox garnered better results by putting the CTA right inside the body copy and image. 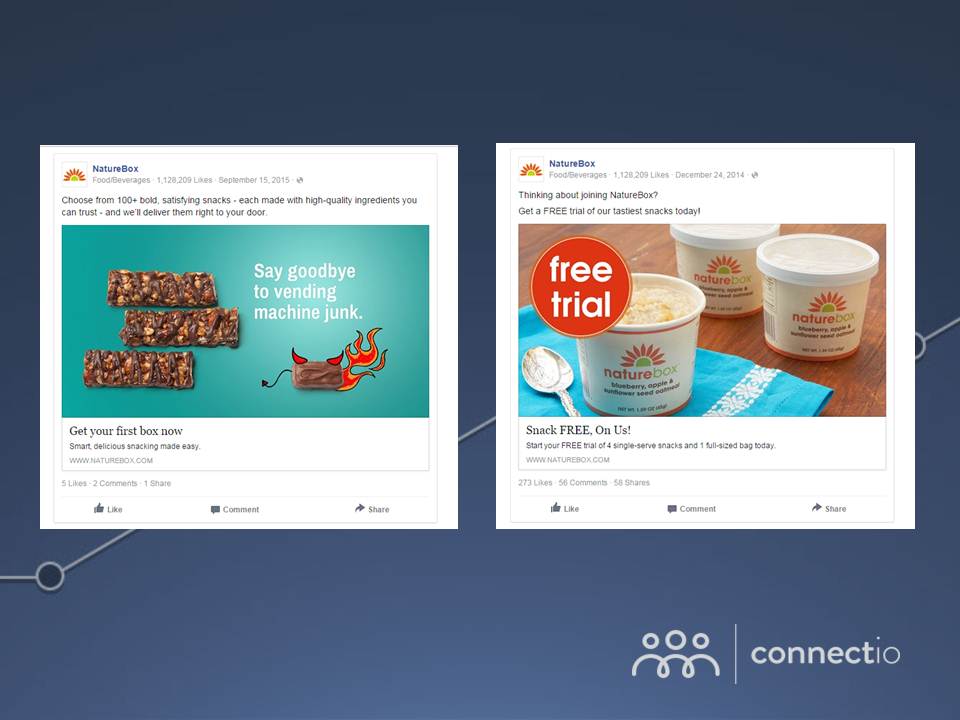 Facebook Ads Targeting provides a wealth of opportunities for advertisers to target people based on their interest, demographics and various other factors.

If you can’t create multiple variations of your ad, you can Split Test your ads on different targeting options Facebook provided.

Now you can split test your ad by delivering your ad based on the type of devices. Good for mobile app developers testing beta versions for different platforms.

3- Test Ad on both Genders

Similar to age, you can also test your ad for male and female audiences separately too.

Want to see how early to late technology adopter react to your ad? You can target your ad to early and late adopters of technology separately.

Test your ad for the people with different behaviors and activities on Facebook. You can target behaviors that include;

Test your ads based on the relationship status of your audience. Create separate ads for singles, married and so forth.

7 Split Tests to Run on your Images

Images play the biggest role when it comes to targeting ads for better conversions. Using images can trigger your click through rate significantly.

Images are an important part of each Facebook Ad. However, you can try splitting, swapping and testing different aspect of your image for better results.

1 – Test between a Textual Ad and an Image Ad

Try creating an ad that has only text in it and compare it with an ad which has image.Verizon find better results when they used image instead of text ads for their wireless service.

One word of caution: use a maximum of 20% of your image for text to stay inside Facebook’s boundaries. 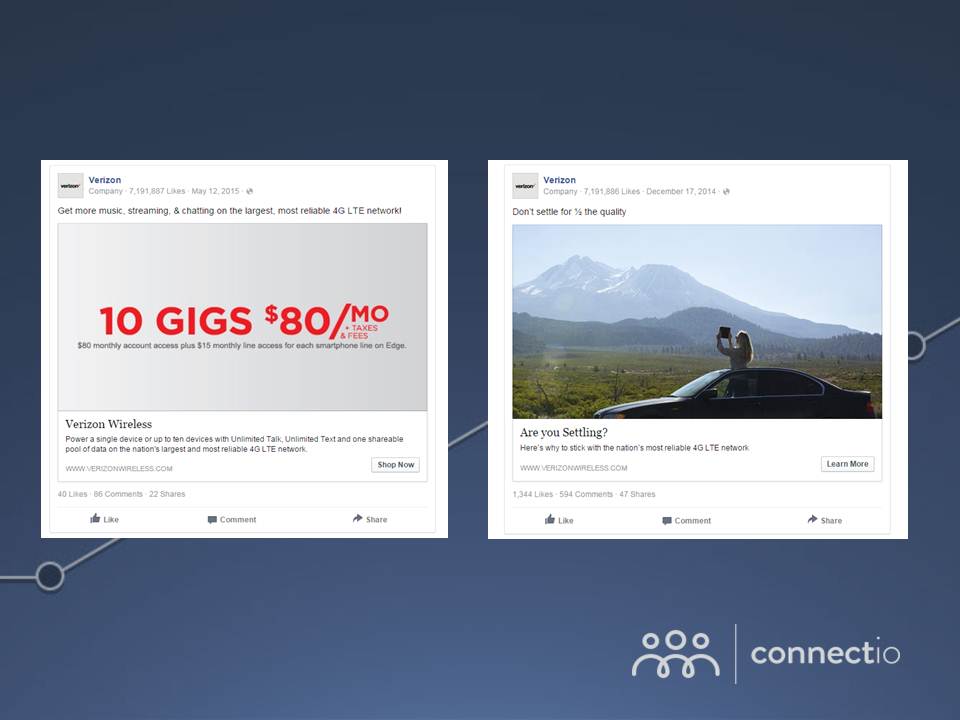 2- Your Product vs People using your product

In the image, split test by using people / real human image in one ad and a product image in another.  JollyChic’s ad response improved when they added humans in their outfits. 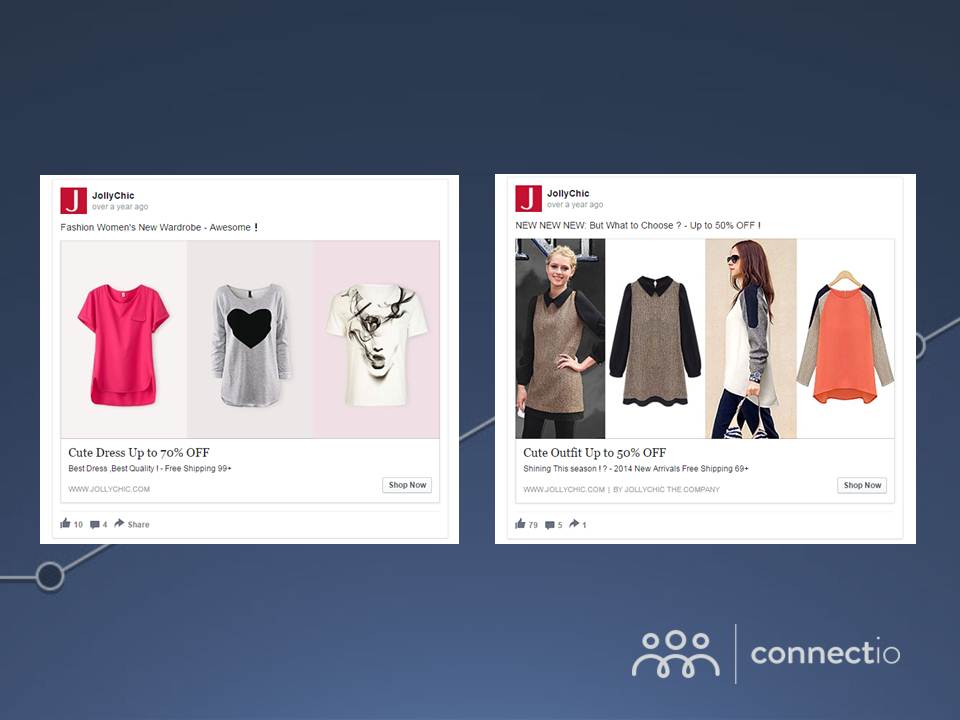 3- Test between a Generic Image and a Targeted Image

Test between using a generic image or selecting a custom image for your ad. Hotels.com improved ad response when they added picture of the locations when promoting their hotel deals. 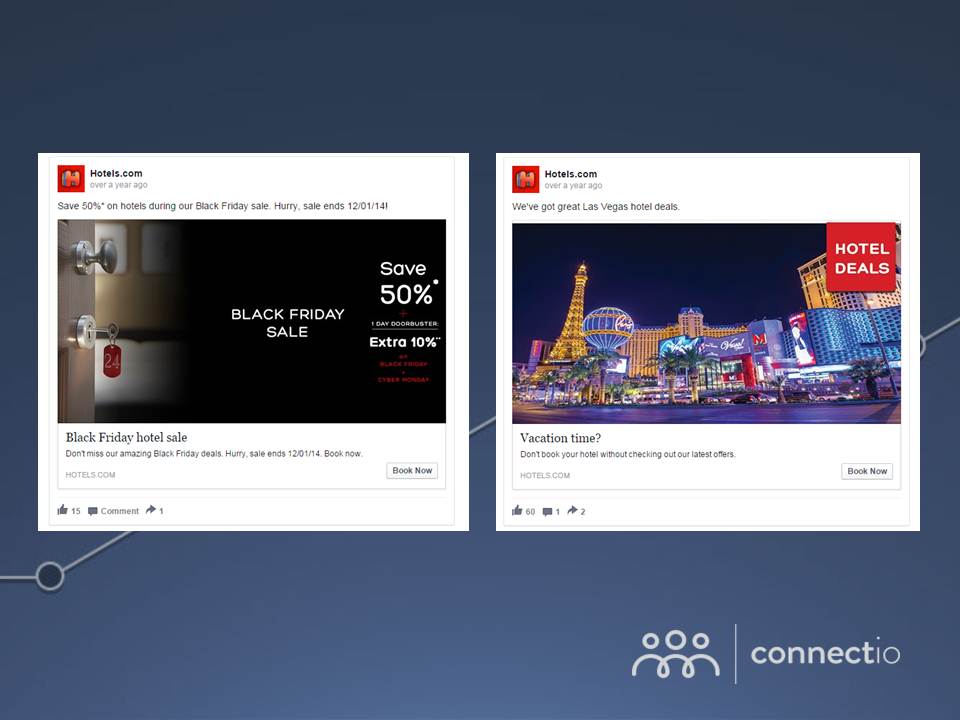 4- Adding or Removing Logo from the ad

Though Facebook Ads are mostly linked with a Facebook page and include the brand’s logo by default, most businesses still add logo in the image / creatives.

However, for SalesForceIQ, the results seems better when they removed the logo from their ad. And the use of image was also targeted than a generic image. 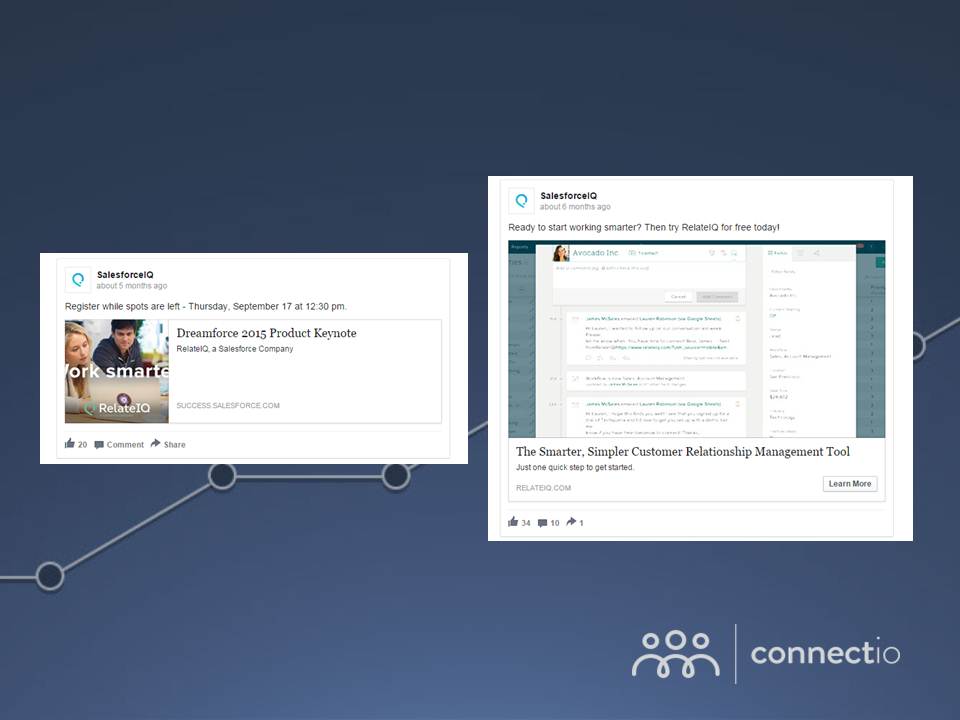 Though rarely used, Facebook Ads can also include videos. Test between an ad that has video in it with an ad without a video.

Upworthy successfully test out their ads that includes videos as videos provides instant information in short span of time. 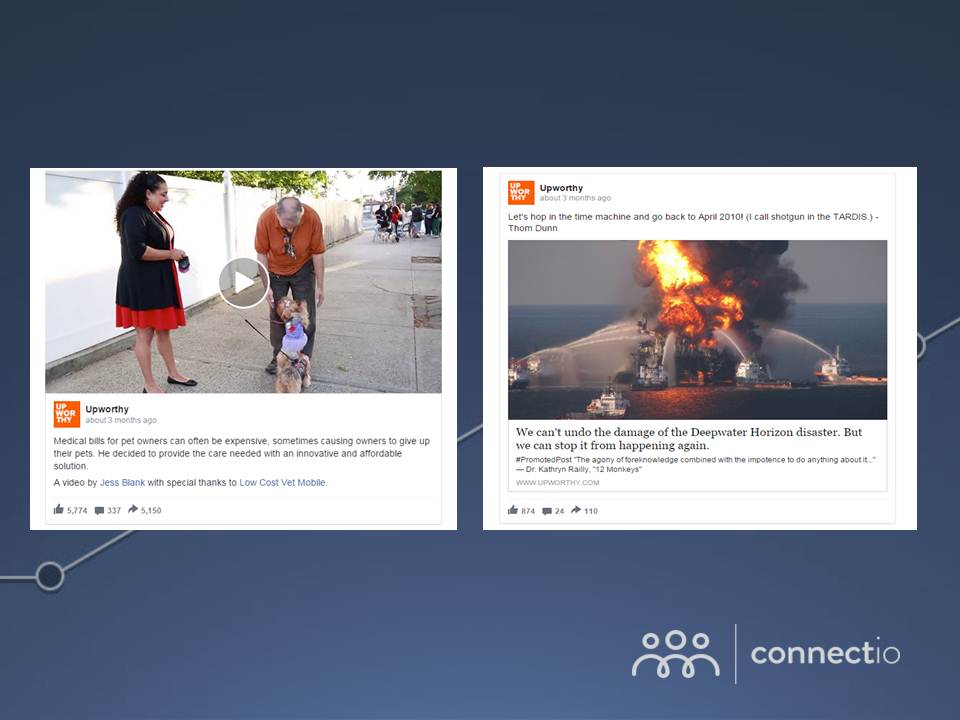 If your service or part of it is free, you can test variations of ads by showing and not showing the “free” CTA on the image.

New York Times earned better results when they mentioned their Free Offer right inside the image and made it more visible. 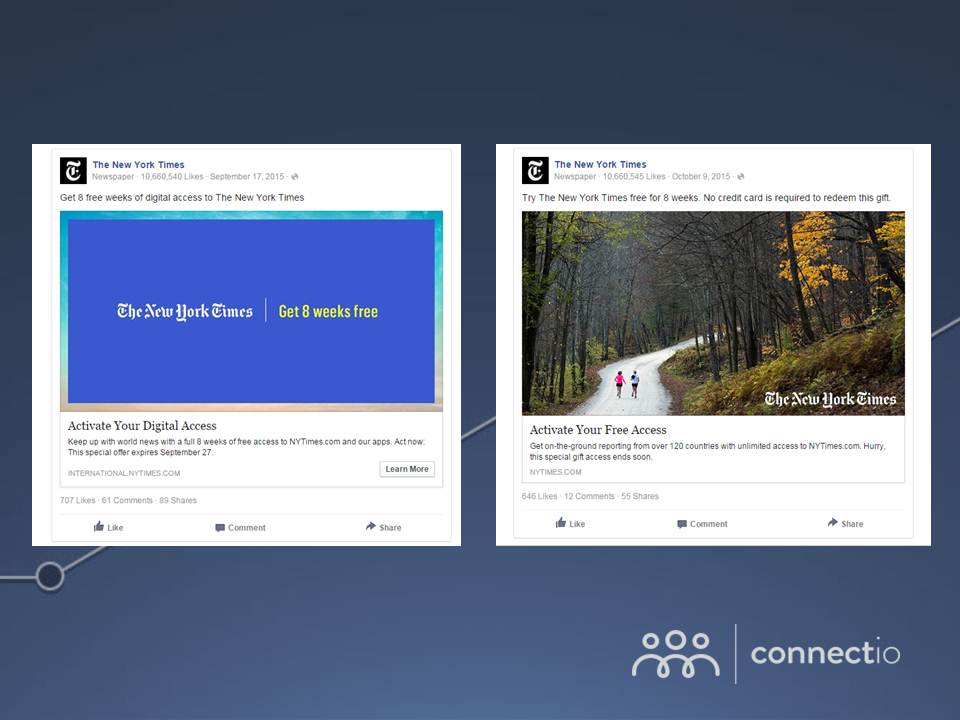 Another interesting spit test to do is to use multiple images along with the common singe image ads. With Facebook Ads Carousel features you can create ads that have multiple pictures. If you are in real estate / fashion business than you should definitely try carousel ads. 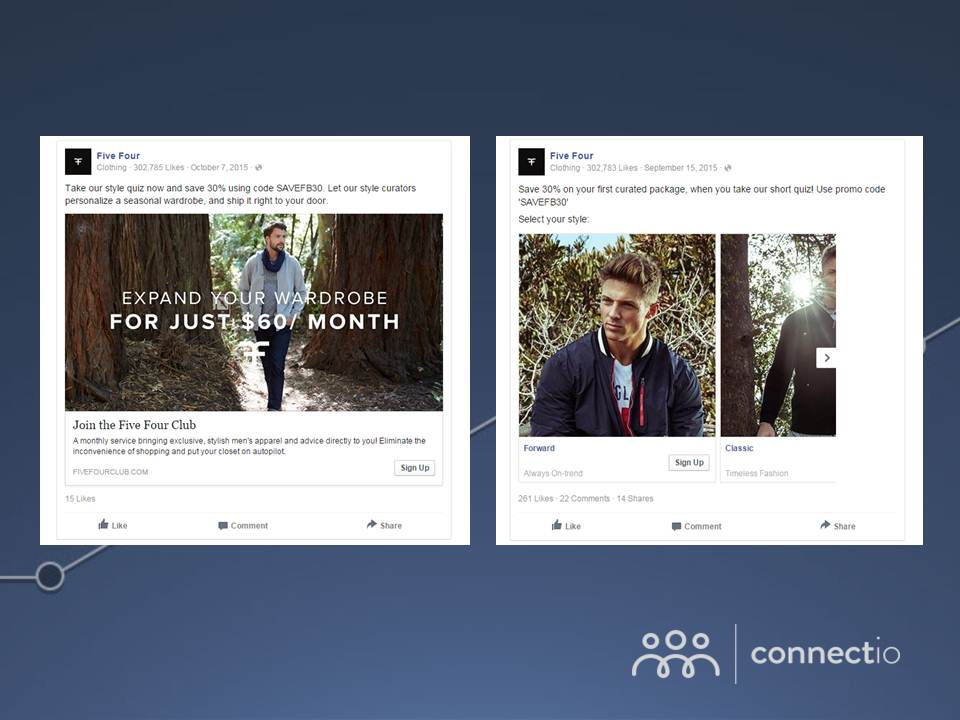 Putting Everything Into Action

So there you have it… 23 ideas you could start split-testing today!

Does that mean you should try them all, right away?

The more things you are testing at the same time, the harder it will be to get any significant results (especially when you’re on a lower budget).

Instead ask yourself what you think will have the biggest effect on your ads.

Start testing these things out first. Once you have a winner, test other things (based on your winner) and keep on testing as you go along.

Do you have any other things you’re split-testing? We’d love to hear it!